With one look at what the O’Reilly Media team, Jon Bruner and Joi Ito had planned for the first Solid Conference, there was never a question of me not going. It was only a question of getting there. Having the deep pocketed editor helping jet-set me around in the pursuit of a story is the unicorn in my freelancing magical world. Between the support of the Vancouver technology community, and the generosity of many others the trip came true because of a successful crowd-funding initiative. The 21st and 22nd of May at Fort Mason revealed a treasure trove of thoughts, conversations, and visions of the connected self and connected society. I’m grateful to have earned the experience. This is only the start of a story that will keep on giving.

For the more than 1400 attendees at times the choices had to be overwhelming. With key note speakers like Rethink Robotics (CTO & Chairman) Rodney Brooks, Google X’s Astro Teller,  Autodesk CEO Carl Bass, Hiroshi Ishii from MIT’s Media Lab and many more, plus five different session tracts with over 100 talks fuelling the imagination. There was so much on display the senses had moments of being overloaded. 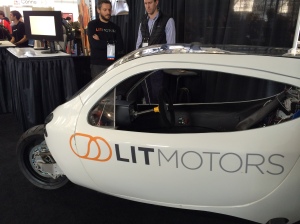 Jon Bruner started everyone thinking by simply asking “what’s a tech company, anyway?” It’s more than the 0’s and 1’s, the circuits, sensors, the materials, the connectivity, and the transcending science fiction into science fact. As the digital experience continues merging with the physical experience, there’s no shortage of why’s to ask. Asking why some of this technology needs to exist is a good place to start. Is it solving big problems? Is it making us more capable? Is it making us smarter? Cool wasn’t making the grade for me.

“Hardware is hard” seemed almost understated coming from someone who’s all about moonshots. Visions of what could be aside, Google’s Astro Teller gave advice more entrepreneurs need to seriously consider saying “get more oil on your hands or mud on your boots to take down the really big problems.” Take the time to learn more about Google X and Astro Teller in the great Fast Company feature.

Envisioning relations in terms of both the potentiality and the tension between our digital, spacial, and physical worlds, Hiroshi Ishii was brilliant.  His talk, “Vision Driven: Beyond Tangible Bits, Towards Radical Atoms” left me breathless.

Ishii leads The Tangible Media Group at the MIT Lab, where the TRANSFORM project is described as one that “fuses technology and design to celebrate its transformation from a piece of still furniture to a dynamic machine driven by the stream of data and energy.

The motion design is inspired by the dynamic interactions among wind, water and sand in nature. Escher’s representations of perpetual motion, and the attributes of sand castles built at the seashore. TRANSFORM tells the story of the conflict between nature and machine, and its reconciliation, through the ever-changing tabletop landscape.” Watch for yourself. 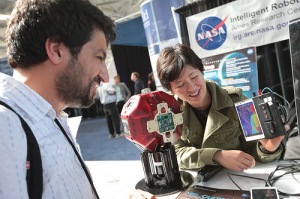 In the category of science fiction meeting science fact, the SPHERES program was on my radar before the conference. Seeing the partnership between NASA and Google first hand was a highlight. NASA says the project “aims to develop zero-gravity autonomous platforms that could act as robotic assistants for astronauts or perform maintenance activities independently on station. The 3D-tracking and mapping capabilities of Project Tango would allow SPHERES to reconstruct a 3D-map of the space station and, for the first time in history, enable autonomous navigation of a floating robotic platform 230 miles above the surface of the earth.”

This video is quite the ride –

Quite possibly it was Richard Isaacs (Mechanical Designer and Organ-builder with C.B. Fisk)  who best wrapped a unique context around Jon Bruner’s opening question. His talk, “Musical Counterpoint in Wood, Bone, Metal, and Carbon Fibre” introduced us to the history and the complexity of pipe organs. It’s worth noting (courtesy of Wikipedia) that “beginning in the 12th century, the organ began to evolve into a complex instrument capable of producing different timbres. By the 17th century, most of the sounds available on the modern classical organ had been developed. From that time, the pipe organ was the most complex man-made device, a distinction it retained until it was displaced by the telephone exchange in the late 19th century.” It’s both a history and a future of craftsmanship and musicianship that’s capable of taking us closer to the heavens than any spaceship can. He also shared an impressive visual collection of “pipe-organ porn” too. 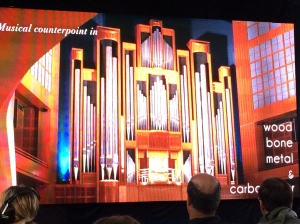 Most encouraging throughout the two days was the talk of design centred thinking, and how crucial user experience and the user interface is. It’s about putting the human experience at the centre of  our hardware and software experiments. We can talk about the industrial internet and the internet of things, yet there is no industry and there are no things without us at the heart of the equation.

Tim O’Reilly summed up the spirit of solid thinking best, saying “we need to think about the people… not just about things.” He also extended all of us a challenge, one we need to collectively endeavour towards delivering on everyday – “work on what is hard.”

Many of the pictures are courtesy the O’Reilly Flickr collection.